http://www.alfordcornexchange.co.uk
Built in 1856 at a cost of £1,400 (Kellys directory 1896), the building bears the Hamilton family motto “Ride Through”.  A Grade II listed building used for functions and events run by the Alford Corn Exchange Community Group.

Built in 1611 this is a II*listed building, and now owned and run by the Alford Civic Trust, the Manor House was extensively refurbished over many years. It now serves as a museum and venue for a variety of functions from weddings to birth ceremonies.  Venue for the May and August Craft Market. 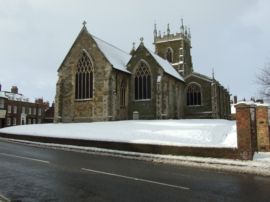 Built around 1350 it is the town’s oldest building, built to replace the earlier church on site since 1150.  The grammar school began life here in a school room above the porch

Set on the approach to Alford from Mablethorpe, the Windmill is a well known emblem of the town.  Built in 1815 and the sole survivor of four mills in Alford.

Formerly known as “The Rec” and given to trustees as a Children’s Play Park, the area was subject to extensive refurbishment since 2000 and is now the town’s Memorial Park, named as a dedication to those who died in WW II